Have you ever asked yourself if engaging the lost in some far-off country was something you could do? Have you ever considered being a cross-cultural worker for the Kingdom? Your parents, as refugees and migrants, might think you are insane for even considering going back to the country they left. But don’t fret, all things Jesus is insane. There are 6 reasons why I believe that we Asians are in a prime position to be at the forefront of world missions today. Here are the first three…

Never before in history has the world been more connected, resources more abundant, people more available and opportunities so great for Kingdom expansion. Globalization has created a much smaller world and this has great implications for advancing the Gospel. We live in a world where the unreached are more accessible than ever. There is no excuse to be unaware. We have info on all the Peoples of the world at our fingertips. Just by living in America you have the information, means and methods to do anything your mind can possibly dream up.  With enough will power, creativity, commitment and team-work Asians can physically reach any group in the world despite the political and geographical barriers. 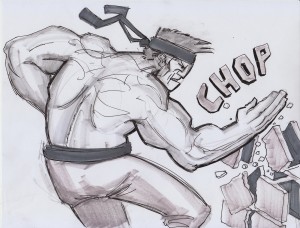 Did you know that there are more chopsticks than there are people in the world? That should count for something. China is soon to overcome the U.S. in its economic output – not to mention the already burgeoning Chinese population at 1.3 billion. Global economic and military supremacy is rapidly being shifted from the West to the East.  America itself will become completely multi-cultural by 2040 when there will no longer be a racial majority, so move over Joe Blow here comes Somsackdy Saysavongthalathsavath – with fists of fury.

In the same way there is a shift happening in world missions. For a long time now white folks have been leading the helm of pioneer missions to the ends of the earth. This is slowly changing. As churches in Eastern and Asian nations become more established they are sending out their own cross-cultural workers. There are many emerging Asian leaders who are coming into their own and developing effective strategies to reach the worlds remaining people groups.

Reason 3)  Strategic Entry: The Art of the Ninja

Ever heard of the 10/40 Window? It’s an area of longitude and latitude on the map that describes where the world’s largest populations of non-Christians are located – which also includes the world poorest. This window comprises countries in Northern Africa, the Middle East, West Asia, Central Asia, East Asia and South-East Asia. Roughly two-thirds of the world population live there and most are Muslim, Hindu, Buddhist, Animist, and Atheist.  Many governments in these areas are formally or informally opposed to Christian work of any kind within their borders.

What type of people do you think are more noticed in these often hostile countries?  The tall white dude who stands three heads above the rest? Or the humble little Asian dude who no one notices? In an increasingly resistant and hostile world trust remains a vital issue. Asians are generally seen to be more passive, at least that’s the stereotype. Asians, like Ninja’s, can move easily between these countries simply because they draw less attention. You are a Ninja and you didn’t even know it.

So what are your thoughts on these first three reasons?