Holidays are much too over-rated in the West.  I think my disappointment began with Thanksgiving.

In elementary school we traced turkeys with our hands, had mashed potatoes, gravy and cornbread in the cafeteria and learned about pilgrims on field trips – what better place to see pilgrims than the Old Sturbridge Village in Massachusetts.  All of it reinforcing western traditions my refugee parents had no idea existed.

After a day of begging and explaining why Indians saved white people my mom finally gave in and agreed to buy a turkey.  When it came time for our first Thanksgiving dinner I was beaming with excitement.  My smile was quickly dispelled when I stood looking at the food laid out on the floor (yes, we eat on the floor).  I didn’t see an oven baked turkey only dishes of turkey Laap!  Laap is a common Asian dish of minced meat with spices and fresh greens. 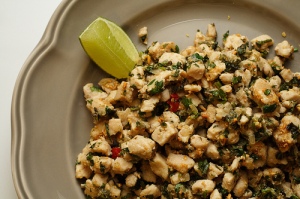 Mom tried but she had never baked a turkey in her life, but Laap, she knew how to make Laap.  From that day on I accepted my fate that Thanksgiving celebrations were to be confined to school cafeteria lunches.  Yet this doesn’t even compare to the disappointment of Christmas.

We owned a plastic Christmas tree…a very nice and large tree that my parents bought at Kmart.  Every winter we would set it up, hang lights, bulbs and ornaments – but there would never be any presents under it.  We didn’t realize that there were “supposed” to be presents until we learned about Santa Clause.

The only presents we ever received on Christmas were free handouts provided from the local community center downtown.  So Santa brought a new kind of hope my brother and I never had.

The world told us that Santa brought kids gifts.  It said that if we weren’t naughty but nice Santa would make us a priority.  It said that if we left milk and cookies on Christmas Eve, Santa would be pleased.  It also said that a reindeer named Rudolph with a bright red nose led Santa’s flying sleigh – now that I never believed cause even as a kid knew how stupid it was.

You could imagine our disappointment that bleak Christmas morning.  It was empty underneath the plastic tree just as the night before.  My early adolescent world was crashing all around me.  Santa was a sham, a punk, a buster.  It wasn’t my parents fault cause they never heard of Santa before, heck they didn’t even speak English at the time.  There was nothing to be done except to turn on the T.V and watch cartoons.  From that point on I never cared about setting up the tree on Christmas. 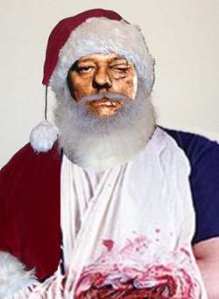 This is why Asians (or any kids for that matter) shouldn’t believe in Santa.  Who the hell is he anyways if not just a mass marketing tool?  My girls never receive gifts from Santa, only real people like Mom and Dad.

No I’m not bitter or emotionally scarred by a mythical character.  But if Santa was real and I ever met him in person I’d punch him in the face.